Wear a Hat for a Day for BTAA 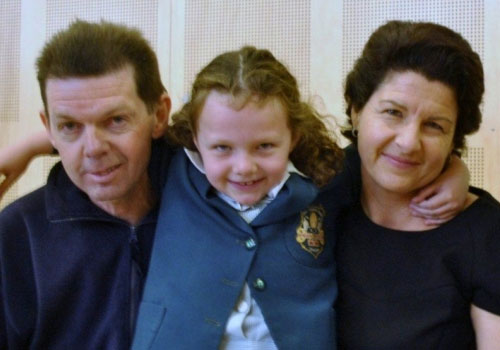 I have a very large tumour located mostly on the left side of my brain which affects my speech and movement on the right half of my body as well as my balance.

I was diagnosed with a grade II oligoastrocytoma in March 2007 when my wife Susan was 7 months pregnant with our first child. We had one week to come to terms with the diagnosis, choose a neurosurgeon, book in for surgery, phone friends and relatives and get all of our affairs in order.

I woke up from surgery with the entire right side of my body paralysed. I couldn’t move my right leg or arm and I had difficulty talking and even swallowing. I was in hospital for nearly two months due to all the rehabilitation but I managed to leave just before Susan went into hospital to give birth to our baby girl. I was still having frequent seizures and suffering severe fatigue so it was a difficult time for all of us but having a child shifted some of the focus.

I started chemotherapy in August 2007. Temozolomide (Temodol) wasn’t available on PBS for Grade II tumours and it was ‘expected’ that I would have PCV (Procarbazine, CCNU, and Vincristine) but I also had an issue with weak veins and I was worried that the injections would be a disaster. So we paid for the Temodol ourselves. It cost around $120,000 for this cycle which took a huge toll on our finances. A cycle is 28 days, 5 days on and 23 days off. That’s nearly $4k per tablet.

I was also concerned about the drug Dilantin which I had been given to control my seizures. It is a very old drug and requires regular blood tests for the INR levels and I needed constant changes to the dose. I managed to transition to Keppra with the help of my neurologist but there was more cost involved.

I suffered a progression of my tumour towards the end of 2012 and lost the ability to speak. I also had trouble understanding anyone if there was more than one person talking at once like social gatherings or busy shopping centres. I went straight back on to Temodal but this time it was covered by the PBS because my tumour had become an anaplastic Grade III. I also had nearly 8 weeks of radio-therapy, 5 days per week which I chose to have in Sydney due to the more advanced equipment. This meant that I had to be away from my family during the week but I managed to go home to Canberra on weekends.

Do you have a story to share? Email BTAA today.
Tell your story

I have been very fortunate. While becoming disabled was a disappointment, I vowed carry on with my normal life as much as possible. Remaining positive is essential.

Becoming a parent after leaving hospital has taught me a lot about dealing with negative emotions, after growing up in an unstructured environment. The self management of emotions is vital as there have been many highs and lows since my initial treatment.

There were many stressful events during 2013 that were triggered by progression of the tumour but we managed to get through it. I no longer work but I look after my daughter more and do more voluntary work so I keep active and involved.