I couldn’t wait until 2020 was finished due to continual lockdowns and other issues because of COVID. I missed seeing my workmates and playing soccer with my Over 45s team. Finally, I commenced annual leave in mid-December 2020 and used the opportunity to catch up with friends and do odd jobs around the house. We also had a summer soccer kick around which used up lots of energy.

Doing some jobs outside, I noticed a slight tingling in my left hand.  I first noticed it around 28 December and it lasted no more than 10 seconds a couple of times a day. I thought it was down to the odd-job work I was doing and thought nothing more about it.
We had some close friends over for New Years' and I started 2021 in a great frame of mind and ready to return to work, at a company I have worked with for over 26 years.

On 4 January 2021, two days before my return to work, I played in the soccer kick around at my club, returned home, had a shower and relaxed for an hour before getting ready for bed. At this stage, the tingling in my hand became a slight shaking and went for up to a minute. My wife and I discussed it and agreed that I would attend the GP surgery the next day to get it checked out and I went to bed. About 11:30 pm that night, the whole left-hand side of my body had gone completely numb! We decided then to call an ambulance, and after initially suspecting that I was having a stroke, the paramedics drove me to Monash Hospital in Melbourne.

From the time I arrived at the hospital, it was a blur however I recall having multiple body-convulsing seizures and myself and my wife were genuinely scared for my life. It was advised that I needed an MRI but as they couldn’t get the seizures under control, they could not proceed with the MRI. My wife was told later that the doctors had given me enough seizure medication to subdue an elephant! It took 15 hours to get the seizures under control. Finally the next day, I was sent for an MRI and received a new visitor, a neurosurgeon, who advised that I had a brain tumour and they need to operate to remove it. This news was delivered on the day I was due to return to work.

Well as a father of two young ladies and being 51 years old, this came like a bolt out of the blue. To top it off, I was advised they will operate on 12 January 2021, our youngest daughter’s 15th birthday. I was admitted to the private hospital, Jessie McPhersons, at Monash in Clayton and the next few days were a real rollercoaster of emotions. They advised they did not know what type of tumour I had and would not know until after surgery and it was in the dish. The night before the operation, 11 January, my wife dropped my girls off at the hospital for a dad/daughter dinner date at the hospital café. Due to COVID complications, I was not allowed more than two visitors and the visit was limited to 1 hour per day. A visit by a neurosurgeon for a haircut is not recommended, as their hairdressing skills are less than perfect. 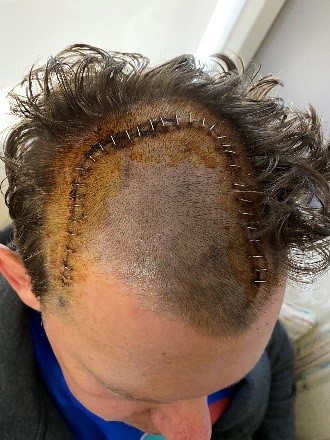 The 12th finally arrived and I had the operation as scheduled. A few days after the operation, the neurosurgeon checked on me and provided the news that no one wants to ever hear; I had a Grade 4 Glioblastoma. Terminal cancer! No signs, no symptoms, other than slight tingling in the fingers. Where were the headaches, blurred vision, dizziness etc?

From that point on our whole life changed. I was referred to a medical oncologist and radiation oncologist who would meet with me and come up with a treatment plan. The first stage was radiation and during this meeting, we were given the news that, based on statistics, I could expect to live between 18 to 36 months! I’m only 51!!! I think my wife and I cried just about all the way home and it was the longest car ride ever.

Telling our kids was honestly the worst thing I have ever had to do. I wanted to be strong for them but it was just so hard. In an instant, my wife Lisa, became my full-time carer while also studying for a new career, 25 years in the making. My licence was voluntarily handed-in to Vic Roads as requested by the oncologist, with the hope of one day returning to driving and assisting my younger daughter to learn to drive. This was a challenge and expectation I was willing to take on. I helped my elder daughter to get her licence; I also want to assist my youngest.

My treatment plan started on 3 February 2021 for six weeks, being 30 sessions of radiation combined with chemotherapy. As my wife had study classes on Fridays, my parents came to our house to drive me to radiation and keep me company. One of the radiation therapists was from Liverpool in England, the same city as my family, and she was a great comfort, especially to my mum while I was receiving radiation treatment. I got to know a few of the lovely nurses during my daily trips to receive the radiation treatment and these people are truly saints!

I finished radiation in mid-March and in a milestone moment, rang the bell to signal an end to the radiation treatment. I continued the chemotherapy Temozolomide, self-administered via tablets. 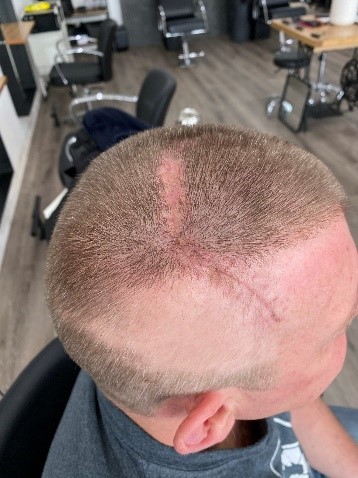 Post-surgery haircut to match where my hair had fallen out.

By mid-May, I wanted to return to work in some capacity but I was feeling the full effects of the cancer and surgery, including lack of strength, focus and overwhelming tiredness, plus the treatment side effects. Our elder daughter had her 19th birthday party and we were determined to hold it, as she didn’t get an 18th due to COVID lockdowns in Melbourne. Standing for speeches during the party was an effort. I’d have to admit at this point I was at my absolute lowest. These were the times where I have wondered if I can keep going, but I promised Lisa I would continue to fight to stay here with every ounce of energy I have.

By mid-June, I finished the chemotherapy and was scheduled for another MRI in early July. Unfortunately, this brought more bad news in that while there appeared to be no change to the original tumour, there was now a second lesion on my brain, which the oncologists and neurosurgeon concluded was another tumour. The nightmare had recommenced. I was sent back for another 10 sessions of radiation plus another chemotherapy tablet, CCNU. This also resulted in another conversation with our girls, which was absolutely devastating!

I became a member of the Man Up to Cancer Facebook group, a men’s support group. In addition to emotional support, they also have a cool range of merchandise. Both my daughters took part in fundraising activities to support me. My younger daughter took part in the annual cancer charity walk with her friend and I met them for the last kilometre.

The radiation ended in mid-August, with the chemotherapy starting a month later. At the end of this latest radiation session, I decided I was not acknowledging the end of treatment by ringing the bell. I was annoyed that I had to come back a second time and so soon after the first, so I was not in the mood for celebrating. This second round of chemo treatment didn’t last very long. With no positive reaction to the treatment and confirmed tumour progression, I was now onto the third, and last chemotherapy treatment. I started Avastin in late October. This is delivered via infusion, hopefully for the next six months, depending upon a further MRI in early January 2022, almost a year to the day of my first diagnosis.

Throughout the year, whenever there were breaks in the treatments we took the time to get away as a family, something we haven’t been able to do for some time. The whole year has been defined by this illness for myself and my family. While I started 2021 in a positive frame of mind, looking forward to all the plans we had, and a family holiday that we missed out on in 2020 due to constant lockdowns, the last 12 months since diagnosis has often shaken my hopes and positivity. I only wish that the next year can give us good news and some hope to cling onto.

I have been provided with great support from my wife, daughters, extended family, friends, and my employer. Lisa and I have received some counselling from a psychologist that I never thought I would need, but which has been fantastic and I highly recommend this for others in this position. We also joined some online support groups and I am comforted that others who have received the same diagnosis as me are living much longer. This information and support gives me great hope for the future, however long that is!