An Inspirational 'Liv On' story from Lyn Phelan

Julia Robertson was diagnosed with an atypical colloid cyst

Thanks for sharing your story Julia - a new BTAA member.
Julia writes: "I was diagnosed in 2003 at the aged of 29.  Our children were still very young my twin step daughters were 13, the eldest son was 9 and the youngest son was 6. The tumour was located in the third ventricle the middle of the brain and a part of the brain's CSF system. I was very symptomatic for 8 years. I finally found a doctor in Sydney who performed my surgery in February 2011. By this time half of my brain had shifted and was asymmetrical from intermittent hydrocephalus caused by the tumour blocking and unblocking the CSF flow for 8 years. I had an endoscopic resection of the tumour and was out of the hospital the following morning. 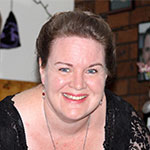 I started studying at 17 months post op (yes I counted) and achieved a Dual certificate III in Business and Business Administration in just over 5 months.
Five  months after that (just under 3 years post op) I started a certificate IV in Adult Tertiary Preparation it was a year long course which I completed with honours.
That launched me into a Bachelor of Science (Clinical Science). So far I have scored credits and distinctions. I have had to take a half year off as my father passed away and it has had a tremendous impact on me. While I have been off I have completed some other online courses:
= Good brain, Bad brain: Parkinson’s - University of Birmingham
= Academic Integrity - University of Auckland
= Exploring play - University of Sheffield
= Basic science – understanding experiments – Open University
= Psychology and mental health - University of Liverpool
= The science of medicines – Monash University
= Inside cancer - University of Bath
= Medicines adherence – Kings College London
= Basic science: Understanding numbers – Open University
= Good brain, bad brain: Basics U OF Birmingham
= Cancer in the 21st century - U OF Glasgow
I went to the Bio med conference in Melbourne in November 2014 last year and I am heading to the Cancer Council QLD Brain Tumour Consumer Forum (7 February 2015).  Apart from that I have been raising a money for brain tumour research doing fun runs and things since 13 months post op.

I have raised funds at the following runs:
The  Cure Cancer Australia Foundation at the Twilight Running Festival 2012 and 2014
The Brain Foundation at the Brisbane Running Festival 2012
The Kim Walters foundation at the Rotary Fun Run 2012
My largest fund raiser was for the Cure Brain Cancer Foundation through a head shave and paint and making paper cranes
I suggested Cure for Life Foundation submit a (successful) proposal for the Sydney Colo(u)r Run 2013. I flew from Brisbane to Sydney with my husband on our wedding anniversary to volunteer with the Cure for Life Foundation stall at the Colour run in 2013
I volunteered to collect and deliver 100 framed photographic prints to the Charles Wanstall Apex Lodge and additional 58 framed prints for Cancer Council Lodges in Townsville and Rockhampton. I collected, printed and framed the 158 images and prints from around Australia and the World through requests on social networking sites.
I have been a part of the BTSM (brain tumour social media) and Brain Tumor Thursday hash tag posts on Twitter. I make a blog post each moth (or more frequently) about my recovery and the things I have learnt along the way. (See my blog here).
I will be 4 years post op next month and am now 41 years old!"

Thanks Julia for your great story, for all your efforts raising awareness and funds, and for becoming a member of BTAA. Keep up the good work.

You can read more about joining BTAA as a member here

You can register for the Queensland Cancer Council Brain Tumour Forum on 7 February 2015 here.